Hiccup was originally workshopped during the Western Australian Theatre Company’s 1987 Playwrights’ Workshop and first performed at The Playhouse Perth on 14 June 1989 with Ron Haddrick as ‘Manny’, Margaret Ford as ‘Miriam’, Alinta Carroll as ‘Paula’, Maurie Ogden as ‘Benny’/’Joseph’ and Andrew DiLollo as ‘David’.

Hiccup is a Jewish comedy centred on the wedding arrangements taking place in the home of the Goldflab family. The wedding plans interfered with Manny Goldflab’s regular Friday afternoon card game with his brother Benny. As far as the other Goldflabs are concerned, Benny has been dead for twenty years.

Darrelyn Gunzburg’s Jewish family comedy is deeply satisfying on a number of levels; it is light, skilfully crafted, and is supported by a wealth of wisdom and knowledge. In the Goldflab family, the wise words of recently deceased relatives were kept alive with the same love and devotion that has preserved Jewish domestic and communal rituals for over five thousand years. Those of us who have lost our roots can take heart from this: inevitably point to the Qabbalah and to the same primary source as the Jewish culture. It is not enough to simply hold on to the past, though, and the play shows the necessity of living in the present without denying the richness of tradition. The language reflects this tension between past and present and is enlivened by the subtlety and wit of Yiddish phrases. However, the pain behind the humour, the angst, is universal. Manny must release the anger and fears locked into the patterns of his family relationships. To experience the energy shifts as he lets go of the past is to experience the healing power of the play.

Hiccup also touches on healing and health in a more obvious way by introducing the Pritikin diet and acupressure (a form of Chinese massage) as alternatives to more traditional forms of diet and medicine. pressure point in our culture (Jewish or otherwise), Gunzburg illuminates the universal truth – the only certainty in the universe is that everything must change. I believe that Hiccup has the power to reach, teach and greatly amuse a very wide audience. 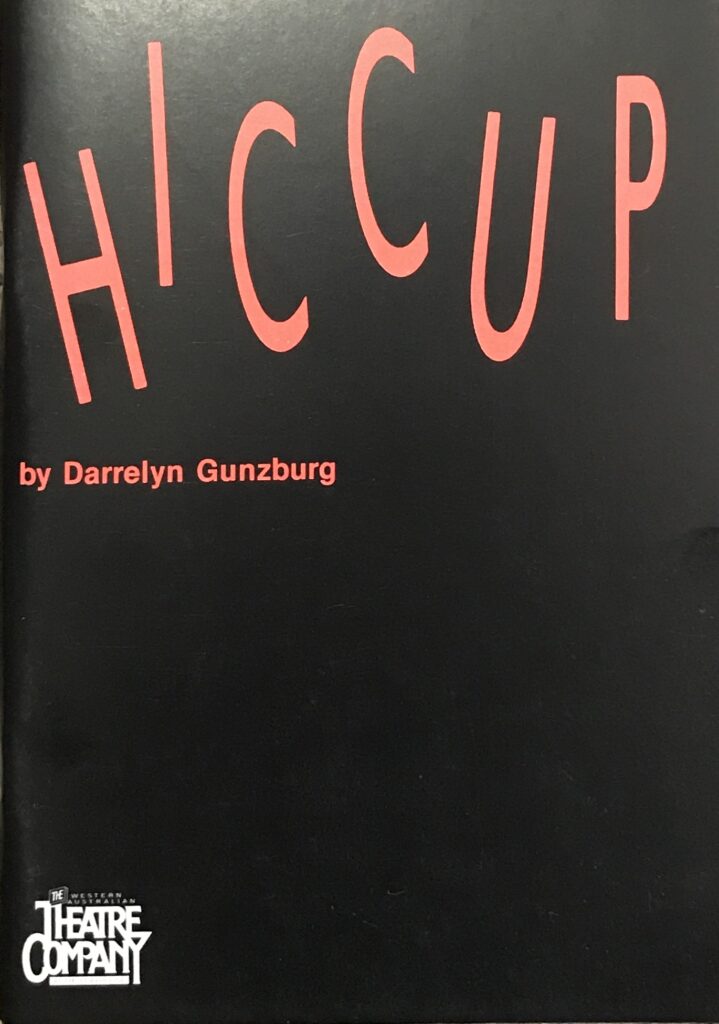 BENNY: Manny, what has happened to your willingness to participate in everything that’s going on around you? Out of our whole family we must have been the only two to get on. We were a marvel to the Goldflab matriarchy. And you know what held us together? Jealousy. You were so jealous of what you thought I had that you tried even harder to emulate me. And you know what that did? It made you find yourself. You gọt out there, Manny. You made a life happen instead of just sitting back and letting it happen to you. And that’s what’s real, Manny Goldflab.

That desire for life itself. The desire to have an effect on someone. To cause a real change in things outside yourself. I once heard a story on the radio. A man decided to put a water tank on his property and his property was two-hundred miles from any other water. So he got a surveyor to come and measure the land and he had a pipe laid and there was this beautiful new water tank. Two weeks later he came back to look at it and it was full of snails. The man was totally confused. ‘How did those snails get there?’ he asked himself. ‘Snails are not the world’s best-known travellers. They don’t fly, they don’t run, they don’t blow in the wind. How did this tank which is two-hundred miles from the nearest water and therefore from the nearest other snail, in two weeks get full of snails?’ Now, being really fascinated with this, he did some research, and do you know what he found? He found that the baby snails had attached themselves to the feet of birds which had come to drink and been flown to the water tank.

Manny, that desire, that desire to explore the world that is so intense that, as a baby snail with a brain that weighs about a quarter of a milligram, you will take the risk of attaching yourself to the feet of a bird in the hopes that that bird is going to fly you somewhere interesting – that’s what life is all about! That is life at its best! And that is what life asks us to do.