The sky forms fifty percent of our visual world and has a voice across cultures. This complex sky-voice contains great diversity and is informed by human images, dreams, and aspirations. The inherent nature of this sky-voice is transmitted from one generation to another through text, image, oral tradition, physical mapping, and painted description.

This volume is written by some of the most noted scholars in their fields of British history, history of art, social anthropology, Greek horoscopes and narratology, globe cartography, comets and Irish mythology, western astronomy, Australian aboriginal sky astronomy and mythology, and cultural astronomy and astrology. These scholars acknowledge the presence of such a voice, in the sky’s movement mirrored in the archeoastronomy of British prehistory, the apocalyptic myths of comets and meteors, the sky cartography reflected in European globes and frescoes, the Australian aboriginal sky myths, the issue of disappearing dark skies, and in contemporary reflections on the sky. It recognises that sky imagery has persisted in similar forms since its potential roots in the Palaeolithic period. These eleven essays offer critical engagement in understanding the sky in human imagination and culture and contribute to the new fields of cultural astronomy and skyscapes, the role and importance of the sky in the interpretation of cultures, emerging within the academy.

Purchase on Amazon
View and purchase at Equinox Publishing 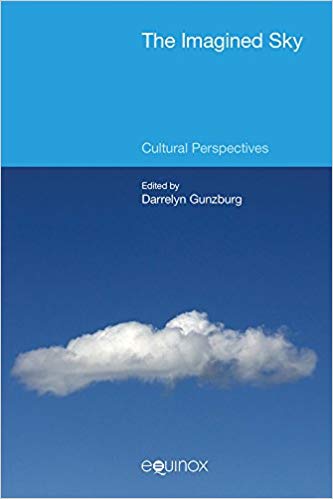 "Collectively the authors make a compelling case for the importance of the sky and its interpretation in human cultures"
Fiona Bowie, Journal of Skyscape Archaeology

‘This is a rich and varied collection of eleven essays dealing with the role of the sky in human imagination and culture. The disciplinary mix is wide, including history and history of art, classics, cartography and social anthropology. Collectively the authors make a compelling case for the importance of the sky and its interpretation in human cultures from the beginning of recorded history, and almost certainly well before that, to the present. In her ‘Introduction’, Gunzburg gives a précis of each chapter, which gives a taste of the range of themes and approaches under the general rubric of cultural astronomy…

Despite being such a mixed interdisciplinary collection of essays The Imagined Sky achieves coherence through its assertion of the cultural importance of the sky, making a very strong case that no discipline can afford to ignore such a central feature of the human imaginal and natural world.’